What is the cause of erectile dysfunction in men?

First and foremost it is important to know and understand the actual meaning of erectile dysfunction. It might happen that you don’t have a proper erection or that during the process of sex, your erection goes down for some reason. If this happens rarely, you need not worry as there might be a temporary issue. However, if such problems take place on a regular basis and you have immense trouble in having an erection and maintaining it, then it is definitely an issue of erectile dysfunction. In such cases, erections are not hard enough for having sex; also the duration of the erection is very short. As a result, the entire sexual process is hampered drastically for men with the problem of erectile dysfunction.

Erectile dysfunction not only impacts the physical health of men but has a great negative impact on the emotional and psychological health of a man. A man starts losing his self-esteem and self-confidence and might become shaky and nervous. A sense of inferiority complex also grows in many men due to the problem of erectile dysfunction. Thus, for the overall health and well-being of men, it is important to address the issue at the earliest.

Viagra is the most common medicine used for treating the issue of erectile dysfunction in men. However, there are some side effects of such medicines. Instead of popping in pills for erectile dysfunction, you can try yoga for helping with the problem of erectile dysfunction. This is a safe, drug-free way of relaxing the mind and the body and to do away with stress and anxiety. In research, it was seen that men who did yoga on a regular basis had better male sex function (1). The improvement in sexual activities after doing yoga practice could be seen in a very short span of time. It is very interesting to see that improvements were not only seen on the erection front; rather improvements were noticed in various areas of their sex lives like enhanced sexual urge and desire, better confidence levels, intercourse satisfaction, great performance, partner synchronization, control during ejaculation and most importantly intense orgasm.

As mentioned above, yoga has proved to be highly effective in treating the problem of erectile dysfunction in men. Mentioned below are some such yoga poses, which you can try definitely: 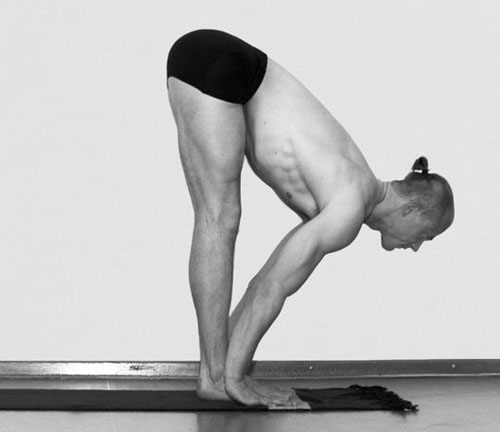 This is also known as standing forward bend in common parlance. The best thing is that this yoga pose is standard in almost all yoga routines. Intense stretching is involved in this yoga pose and it helps with issues like anxiety. It has shown to be great for infertility issues. Not only this, but the yoga pose is also great for bettering digestion and for the stimulation of various organs in the abdomen.

How it is done: For uttanasana, stand on the mat with hands on the hips. While exhaling, bend the torso in front direction hinging from the hips. Make sure that you lengthen your torso forward. Do not just fold over. Now bring the fingers to the floor, right in front of the toes. The knees should be absolutely straight. However, for the newbies, a slight bend in the knees is okay. If the feet cannot be reached with the hands, the forearms can be crossed and can be held on to the elbows. Try to be in this pose for 30-60 seconds. While inhaling, try lifting the torso and lengthening the body a little more. While exhaling, relax deeply into the stretch. You will feel that your head and neck will feel relaxed with this yoga. 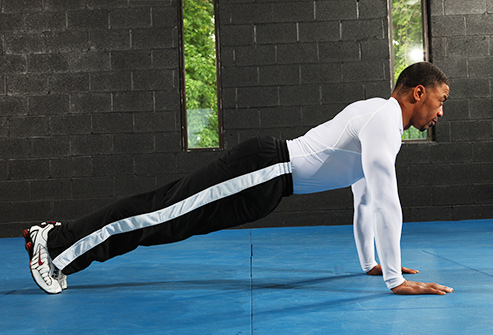 This yoga pose is called the plank pose generally. You might not be aware of the fact that this is one of the best yoga poses which helps in boosting and enhancing stamina in bed along with bettering endurance significantly. The strength of the upper body is also boosted considerably with the help of this yoga pose.

How it is done: For kumbhakasana, you have to lie on your stomach on a flat surface, preferably on a mat. Make sure that your palms should be by the side of your face. Now exert pressure on your palms and on your toes and push your body upwards by the full strength of your palms and toes. Try staying in that position for as long as you can. Initially, you will feel the arms and the legs getting strained, but with practice, you will be able to be in that position for long comfortably. 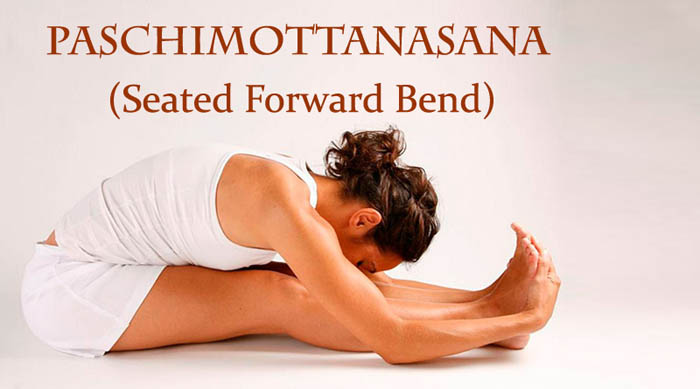 This is the seated forward bend yoga pose. This asana is great for relaxing the pelvic muscles, which actually remain tense from sitting for long stretches of time. Not only this, better blood flow is ensured with the help of this yoga asana. If you are suffering from mild depression and anxiety issues, this yoga helps in relieving stress and calming you.

How it is done: Sit on your yoga mat and stretch your legs completely in front of you. If you think you need extra support, you can use a folded blanket. Adjust your body in a manner so that the hips are slightly apart. While inhaling, keep the upper body long as much as possible. Now lean forward so that your tailbone is lengthened. Now reach to the floor. Try grabbing your feet with your hands by extending the elbows completely. Try using a yoga strap around the feet for little ease in stretching. Be in this pose for 60-180 seconds. Concentrate on the breath and gradually relax and release the body. 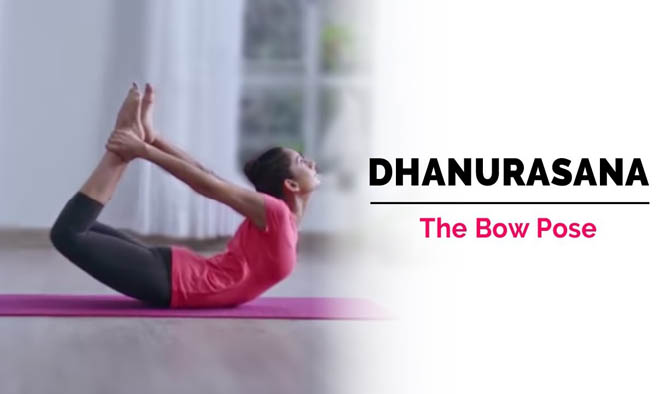 It is evident from the name of the yoga pose that it will be something like a bow. This is the reason, it is also called the bow pose. This yoga asana helps in stimulating the various reproductive organs in the body. The circulation of blood is increased and improved in these areas. Also with this yoga pose, you can stretch all the muscles to the front of the body, including that of groin and thighs. This yoga is great for overall posture.

How it is done: Lay on a flat surface on your stomach in facedown pose. The feet should be hip-width apart and the arms should be at the sides. Raise the legs behind while simultaneously raise the upper body and reach for the ankles with the hands. Once you get hold of the ankles, pull the legs up and back. The chest should be off the floor. You must keep in contact with the floor with your pelvis. Remain in this position for 20-30 seconds. Exhale deeply and release from the pose. Repeat as many times you like. 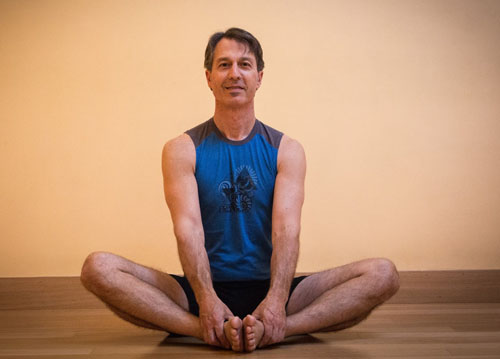 This yoga pose is known by two names – butterfly pose and bound angle pose. The advantage of this asana is that along with stretching the groin and inner thighs, the prostate gland is stimulated along with other organs like kidneys, bladder, and other abdominal organs.

How it is done: Sit on the mat with legs extended in front of you. While exhaling, bend the knees and pull the heels inwards towards the pelvis, one at a time. Now drop the knees to either side and bring the bottom of the feet together. You can use your fingers for grabbing the big toes or you can grab the shin or the ankles with the hands. Remain in this position for 1-5 minutes. While inhaling and exhaling, try lengthening the torso as much as possible.

All these yoga asanas are really helpful for men to combating their erectile dusfunction problem and remaining healthy overall.